The objective of this activity is to use data from the 2021 Speed Climbing and Lead Climbing Olympic to investigate relationships, create regression models, make predictions, and examine residuals.

During the 2021 Summer Olympics in Tokyo, competition climbing became an Olympic sport for the first time ever. Athletes competed in three separate disciplines: speed climbing, bouldering, and lead climbing. There were 20 men and 20 women who competed in the 2021 Olympic Sports Climbing Qualification Rounds.

In speed climbing, two climbers race side-by-side to scale identical routes on a 15m high wall set at an angle of 95 degrees.

The walls used for bouldering present a range of challenges, with overhangs and some holds so small that they can only be held by the fingertips. Climbers must plan each move carefully while constantly being aware of the 4 minute time limit. The goal is to complete as many routes as possible.

When lead climbing, athletes wearing harnesses attached to a climbing rope attempt to climb as high as they can on a taller wall measuring 15-20 meter within six minutes. The wall features 40-60 handholds. Climbers are scored on how far they progress, with each handhold earning 1 point.

The table below data gives information about the three disciplines for each athlete in the women's qualification rounds. The data include the time, in seconds, of the speed climb, the number of holds attained in lead climbing, and their ranking in the bouldering competition.

Answers will vary. "Since both of these disciplines require climbing high walls, I predict that athletes with short climb times in Speed Climbing will attain higher holds in Lead Climbing."

A scatterplot can be constructed using the Regression application. Input the time in X1 and the number of holds attained in Y1. Use the Graph tab to view the scatterplot. 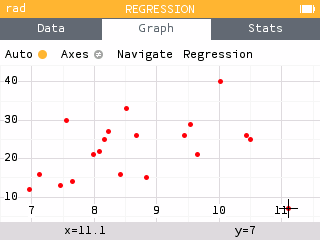 There appears to be a weak, positive, linear relationship between the time in Speed Climbing and the number of holds in Lead Climbing. A possible outlier is the athlete with a time of 11.1 seconds and 7 holds. 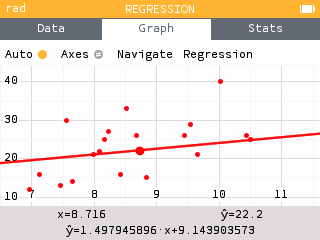 The regression equation can be found by navigating onto the line or in the Regression menu. The model is y^​=1.498x+9.144 where y^​ is the predicted number of holds attained in lead climbing and x is the time in seconds in speed climbing. A slope of 1.546 means that for every additional one second the climber took to copmlete the speed climbing event, they are expected to obtain 1.546 additional holds on average.

The correlation coefficient is reported in the Stats tab. 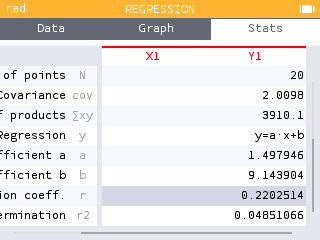 r = 0.2205 confirms that there is a weak, positive, linear relationship between speed climbing time and holds attained in lead climbing.

To investigate the relationship between the athlete's time in Speed Climbing and their rank in Bouldering, a scatterplot and linear model was created as shown below. 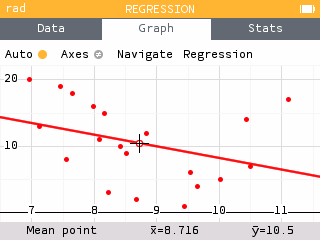 has been suggested as a good fit for the data. The table below displays the 20 athlete's time in seconds during Speed Climbing.

A residual of 6.302 means that this athlete ranked about 6 positions higher (worse) than expected by the model, based on their time.

A residual plot can be constructed within the Regression menu. 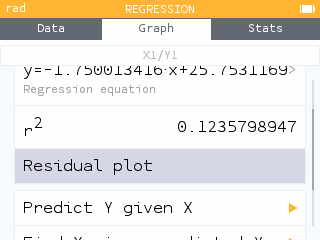 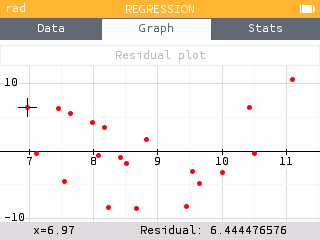 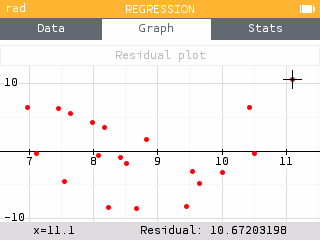 There appears to be a pattern in the residual plot. Therefore, a non-linear model is more appropriate.

Perform a quadratic regression on the athlete's time in Speed Climbing and their rank in Bouldering. Assess the fit of the quadratic function by plotting and analyzing the residuals. 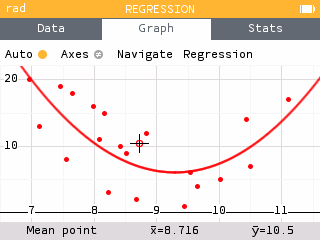 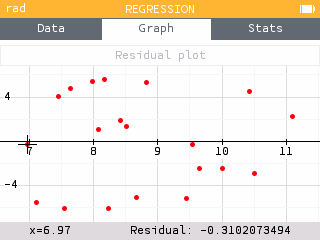 The regression model can be changed to quadratic by selecting Regression in the Graph tab and choosing Quadratic for the model type. The residual plot using a quadratic regression appears to be more randomly scattered than the linear model. This suggests the quadratic model is more appropriate.