The objective of this activity is to use data from the 2021 Speed Climbing and Lead Climbing Olympic events to calculate summary statistics, construct graphs, and describe and compare distributions.

During the 2021 Summer Olympics in Tokyo, competition climbing became an Olympic sport for the first time ever. Athletes competed in three separate disciplines: speed climbing, bouldering, and lead climbing. There were 20 men and 20 women who competed in the 2021 Olympic Sports Climbing Qualification Rounds.

In speed climbing, two climbers race side-by-side to scale identical routes on a 15m high wall set at an angle of 95 degrees.

The walls used for bouldering present a range of challenges, with overhangs and some holds so small that they can only be held by the fingertips. Climbers must plan each move carefully while constantly being aware of the 4 minute time limit. The goal is to complete as many routes as possible.

When lead climbing, athletes wearing harnesses attached to a climbing rope attempt to climb as high as they can on a taller wall measuring 15-20 meter within six minutes. The wall features 40-60 handholds. Climbers are scored on how far they progress, with each handhold earning 1 point.

The table below shows the number of holds attained by the 20 women during the Lead Climbing Qualification Rounds.

The 5-number summary statistics can be computed using the Statistics application. Input the number of holds attained in V1. 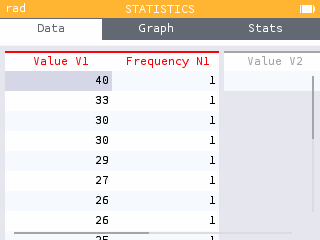 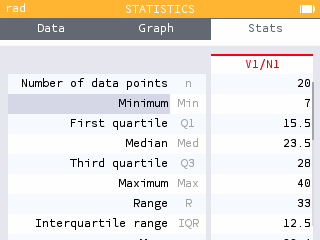 Use the Stats tab to obtain the necessary values

Use the Graph tab to construct a Histogram and Boxplot of the data. 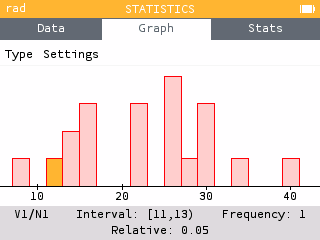 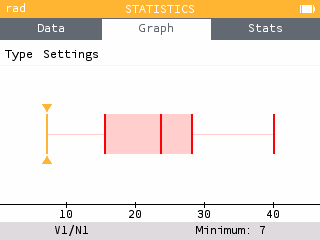 The distribution of holds attained by female Olympic climbers is fairly symmetric with one peak. The distribution is centered around the median of 23.5 holds with a range of 40-28 = 12 holds. There are no obvious outliers.

The table below shows the number of holds attained by the 20 men during the Lead Climbing Qualification Round.

A boxplot can be constructed using the Statistics application. Input the number of holds attained in V1. Select the boxplot from the Graph tab. 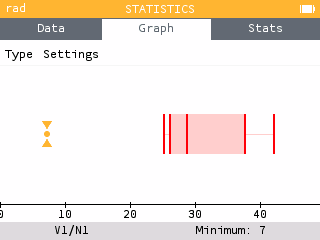 The mean and standard deviation are not resistant to outliers. Therefore, the median and IQR should be used to describe the distribution.

The table below shows the times (in seconds) of the 20 men and 20 women during the Speed Climbing Qualification Round.

Use the Histogram or Box options from the Graph tab to construct graphs to compare the data. 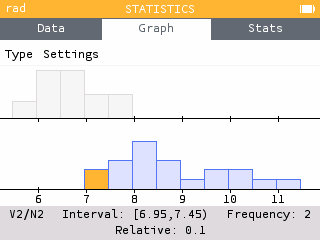 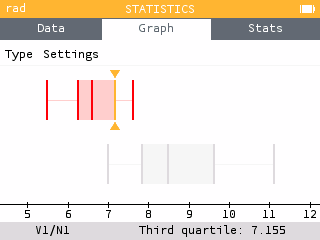